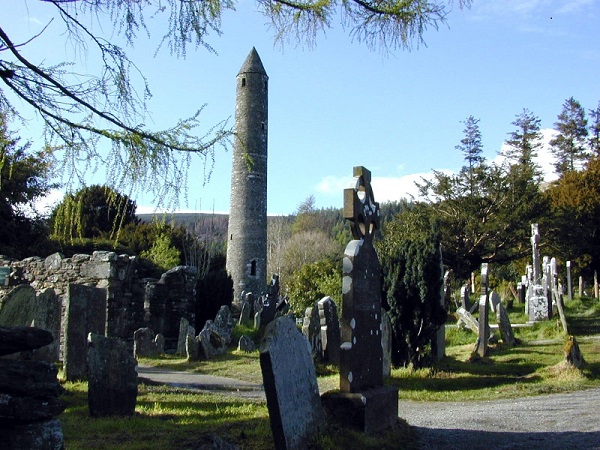 Paul insisted in showing me the waterfall at Glendalough, so away we went.

Walking along the path in the Monastic City, we snapped photos of the aged and ruptured headstones caused from centuries of nature’s turbulence, and the remains of the 7 churches, and home of the monks that were destroyed by the Normans in 1214 A.D.

Passing the ancient Round Tower that the monks built as a lookout tower and place of refuge; we stopped, closed our eyes and imagined the sounding of the bell that called them to safety. Turning we supposed them dressed in their hooded brown robes climbing the hill towards the tower.

Moving onto the pathway towards the waterfall, the air was fresh with the scent from nature’s blanket, created with a breathtaking 40 shades of green. The velvety moist moss interweaving around the bottom of tree trunks and Irish ivy extended itself to the grasses at the edge of the path. The crunching dirt and gravel under our feet was all we heard under the silence and motionless air. We respected the serenity and peace that belongs to Glendalough.

The night approaching, I swiftly asked, “Are we almost there? It’s getting dark.”
“Yeah, a little bit more,” said Paul.

Keeping my eye on the darkening night’s sky, we continued on our journey.

Climbing the ancient stone steps, we turned and witnessed nature’s striking waterfall that the monks too had appreciated from the small church ruin to the side. The holy water spilling down the mountaintop hit the large rocks and splashed the greenery, feeding the land with history and everlasting life. The 6th century relics of the stone church stood, telling a tale to those who appreciated its story. Ash coloured ancient tombstones of the monks, who now had a permanent residence, allowed us to behold their spiritual presence. We observed a moment of delicate silence.

After capturing pictures of the centurial burial place, we began our journey to the land of the living. “Paul, let’s get outta here; ten minutes and it’s going to be black. My cell is almost dead and about to rest with the monks.”
“Alright,” he said.

The moon quickly became a lantern as our steps quickened in the stillness of our surroundings. Moving into a run, Paul walked behind me. I heard a loud rustling, stopped and turned to look behind Paul, “What is that?”

Paul turned. The garish wind and rustling leaves cultivated strength in volume as the audio grew closer and closer. Visually searching the pathway, we saw nothing, but the swishing of leaves atop the trees sounded an urgency to get out. Standing in our absolute motionless and silent surroundings, we were in awe of the unknown, unable to move. We watched as the crunching of foliage and coiling breeze grew thunderous as it advanced en route to us.

Looking over my shoulder, the stillness of nature graced the trail, but behind Paul the path was filled with mystic bustles. “Paul, what’s going on?” Nature orchestrated a tremendous symphony that danced throughout the Sonatina. Suddenly, the heaviness of nature’s sounds touched us. Simultaneously, my hair blew back, I took a deep breath, and a brisk chill went through me during the exposition of the Sonatina.

“Did you feel that?” Paul asked.

Turning we watched as nature stirred its flight to the Coda and listened to its chiming resonances move briskly along to a silent presence.

“There’s no wind behind you. It’s gone,” I said.
“It’s still travelling along the path,” Paul said.

We imagined the tenor bell toll in the Monastic City, the bell that once called the Monks to refuge; though felt their spirits run through us, heading for the ‘CLOIGTHEACH’, the Bell Tower.

Marian Evans travels the world while sitting comfortably in her kitchen.

Accepting a monthly influx of International students in her home, to study English, she receives a colorful update of global politics, social mores and economy, about their country.